Southern Heritage News & Views now has 2400 plus subscribers. Thanks to all of you for your continued support.

posted by Chuck Demastus at 7:37 AM 0 Comments


The Virginia Division of the Sons of Confederate Veterans will hold a press briefing in front of the South entrance of the General Assembly Building adjacent to the State Capitol in Richmond, Virginia, beginning at 10:30am on Thursday, September 28, 2006.

State Commander Frank Earnest of Virginia Beach will answer questions from the press relating to the recent statements of Senatorial candidate George Allen regarding the Confederate Battle Flag. The Sons of Confederate Veterans strongly disagrees with Senator Allen’s remarks relating to the Battle Flag and opposes bigotry in any form, including the “macaca moment” which came from the Senators own mouth. The SCV is concerned that Senator Allen has deviously tried to divert attention from his own remarks and past activities to malign a flag which millions of Virginians have a great deal of pride in.

Commander Earnest strongly feels that “there is no place for bigotry in Virginia or her electoral process”.

Anyone needing information on this press conference should contact Brag Bowling at 804.389.3620.

"Sherman's Last Burning"
What would happen, if we "REAL SOUTHRON" had a cotton picking BBQ down South?...PoP
Story HERE

posted by Chuck Demastus at 11:41 AM 0 Comments

posted by Chuck Demastus at 11:03 AM 0 Comments

Southern Heritage in the SPLC's crosshairs

"The vestige of slavery that has divided our nation for all these years" is?

Southern traditions are what make us unique

posted by Chuck Demastus at 9:46 AM 0 Comments


Want to get riled?
A Confederacy of dunces
Story HERE

WE CAN NOT LET THIS GO UNCHECKED!

Think of future ads and content if they get their foot in the door on this one! 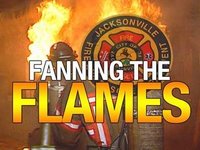 Black Firefighters Association's commercial slamming the mayor of Jacksonville, Fl. is expected to begin appearing on cable television. The ad slamming the mayor includes images of a confederate flag and a noose superimposed over pictures of the mayor as banjo music plays in the background.... This is a deliberate attempt to incite racial unrest. Ya know, maybe a few fires?? PoP

posted by Chuck Demastus at 10:22 AM 0 Comments

Google opens up 200 years of news

The news archive search is one of several new Google services
Web giant Google is further expanding its online empire with the launch of the Google News Archive Search.
BBC NEWS
Article HERE

posted by Chuck Demastus at 10:18 AM 0 Comments

posted by Chuck Demastus at 10:55 AM 0 Comments

The battle over flag's meaning

The poet, Robert Frost, in his poem Death of the Hired Man, wrote this line: Home is the place where, when go, they have to take you in. I think Frost was saying that at our “home place,” we have unconditional acceptance, a strong sense of belonging.

One of the cultural differences between Southerners and those from other regions of the U.S. is our “sense of place”; an indefinable, yet undeniable bond to a plot of earth, we refer to as the “home place.” A country music song has the following line: Everybody had a place and places had a heart. And who can forget those boys from Fort Payne singing: Oh, my home’s in Alabama, no matter where I lay my head…..” Both these have “home place” as their theme.

Have you ever heard of Southerners retiring to places like Chicago or Cleveland or New York? No. Our roots are too deep in the soil of our “home place.” Snowbirds come south; but we sun birds stay put; we don’t migrate to other places to live out our retirement days. We know we’re already in the best place.

For some their “home place” might be an unpainted wood frame house at the end of a dusty country road; for others it could be a more affluent structure set on 640 acres; and I have had older people point out to me only a grove of trees and say, “That’s our home place. That’s where Papa built the house we were all raised in.” A spot of ground that will, as long as one remembers, be their “home place.”

Folks who move south from other regions don’t understand some of our customs associated with a “home place.” For example, if we’re not in church one Sunday, when we return we will surely be asked: “Didn’t see you in church last Sunday. Were you sick?” Outsiders may think our friend is being nosy; but we know better. Yes, at the “home place,” people may appear to “tend to our business,” but we are not offended. This is as much a part of our home-place culture, as always beginning conversations with: “How are you? How’s your mamanem (translated “mama and them?”)

At the “home place,” we grew up secure in the knowledge that if we needed the people down the road any time day or night, we had only to ask; in contrast to those who live in high rises and condos and “planned communities,” who don’t even know their neighbor next door or across the hall. Not only do we know our neighbors, we knew their granddaddy.

What is it, this drawing-and-holding power of “home place?” Maybe southern comedian, Jeff Foxworthy explained it best when he said: “It’s a Southern thing; you wouldn’t understand it.”

posted by Chuck Demastus at 9:59 AM 0 Comments

No more protests, but Confederate flag issue persists at LSU

SEC organizes tailgate for equality
'We want everyone to come out'
by Nathan Trifone
LSU The Reveille, Louisiana
Contact Nathan Trifone at ntrifone@lsureveille.com
Story HERE