Though many black men followed their Southern friends into the military due to them being together since boyhood, many Northern officers ensured that black servants were around for menial work and labor. Also, it should be noted from the passage below that only the State legislatures and governors are empowered by the Constitution, not Congress, to “federalize” State militia. The Northern States helped destroy the Founders’ Constitution by giving a president autocratic power over their individual militias to do with as he pleased. By supporting an American Caesar, they brought and end to the republic. 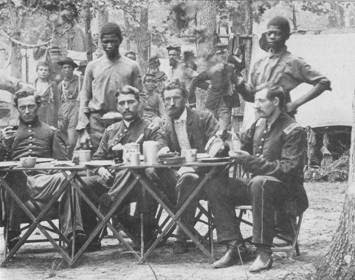 “The young, inexperienced recruits at Elmira and other military depots were destined to march into battle poorly trained, and at best partially prepared. In July 1861 a caustic William Tecumseh Sherman (then a Union colonel) noted: “Our men are not good soldiers. They brag, but don’t perform, complain sadly if they don’t get everything they want, and a march of a few miles uses them up.”

In early June…the 770-man 19th New York (known as the “Cayugas”) boarded a special train on the Elmira and Williamsport line. The 19th’s officers did not leave Elmira without the luxury of ancillary assistance. Reflecting the racial attitudes of the day, the New York World reported: “A recruiting agent succeeded during the last day in enlisting from the Brainard House and other hotels a corps of body-servants (colored) for the officers. These fellows had a farewell celebration of their own…and were petted, caressed, gifted and bussed by a large and well-dressed delegation of ace-of-spade negroes, mulattoes, and quadroons.”

The village…[of Elmira] served as a State military depot until July 1863 when it became a federal draft rendezvous. With the number of volunteers dwindling, Congress passed an ambiguous bill in July 1862 that empowered President Lincoln to call the militia of the respective States into federal service. Referring to the law as one “of dubious legality and confusing arithmetic,” historian James M. McPherson has concluded: “The government did not hesitate to use this power to reach across the State boundaries and institute a quasi-draft.”

This was followed by Congress’s passing, and Lincoln’s signing, the Enrollment Act on March 3, 1863. This law established a draft that “commuted” those who could either send a substitute or pay $300 cash to the federal government. Obviously more wealthy Americans could take advantage of “commutation.” In New York State this meant that lower class, working class Irish and Germans would form a significant percentage of drafted men.”