Southern Heritage
News and Views: The Gettysburg Reunion of 1913

The Gettysburg Reunion of 1913 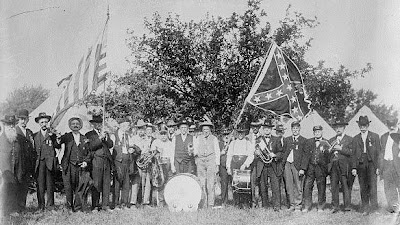 By Calvin E. Johnson, Jr., Speaker, Writer, Author of book “When America Stood for God, Family and Country” and member of the Sons of Confederate Veterans. cjohnson1861@bellsouth.net

America will celebrate her 235th birthday on July 4th!

Fifty years had passed since the Battle of Gettysburg, July 1st- 3rd, 1863, when the Veterans of Blue and Gray braved the summer heat to meet again in Gettysburg.

America celebrated her 137th birthday, nearly a century ago, when….

From June 29 to July 4, 1913, 53,407 Confederate and Union Veterans of the War Between the States came to Gettysburg, Pennsylvania for a Reunion and encampment. Veterans came from 47 of the 48 states of the Union and the Chief Surgeon said of the event, quote “Never before in the world’s history had so great a number of men advanced in years been assembled under field conditions” unquote.

It was the largest combined reunion of War Between the States Veterans.

Do you know who Gen. Robert Edward Lee, Major Gen. George Edward Pickett and Major Gen. Joshua Lawrence Chamberlain were? Are children still taught about these men and all those who met on the famous War Between the States battlefield at Gettysburg, Pennsylvania? Some call the Gettysburg Battlefield the most haunted place in America because so many thousands died on that fateful month of July 1863.

“Comrades and friends, these splendid statues of marble and granite and bronze shall finally crumble to dust, and in the ages to come, will perhaps be forgotten, but the spirit that has called this great assembly of our people together, on this field, shall live forever.”

The youngest Veteran was reported to be 61 and the oldest was 112 years young.

The United States and Confederate flags flew side by side at the Gettysburg soldier’s reunion of honored men who had been enemies on the field of battle.

The State of Pennsylvania hosted the 1913 reunion at the insisting of state Governor John K. Tener. Tener also encouraged other states to arrange rail transportation for the participants. Down South in Dixie, the United Daughters of the Confederacy helped raise money for the transportation and uniforms for their Confederate Veterans.

The soldiers of Blue and Gray, Black and White, came with heads held high and full of war stories. It is written that the hosts did not count on Black Confederates attending the meeting and had no place to put them but the White Confederates made room for their Southern brothers. Black Union veterans also attended this event.

It is written that nearly 700,000 meals were served that included fried chicken, roast pork sandwiches, ice cream and Georgia watermelon. The temperature soared to 100 degrees and almost 10,000 veterans were treated for heat exhaustion and several hundred more were hospitalized. The United States Army was also present in support and it’s written that the old men loved the attention.

A highlight of the reunion was the Confederate Veterans walk on the path of Gen. George Pickett’s charge that was greeted, this time, by a handshake from the Union Veterans.

“These venerable men crowding here to this famous field have set us a great example of devotion and utter sacrifice. They were willing to die that the people might live. But their task is done. Their day in turned into evening. They look to us to perfect what they established. Their work is handed to us, to be done in another way but not in another spirit. Our day is not over; it is upon us in full tide” unquote.

The War Between the States Sesquicentennial, 150th Anniversary, runs 2011
through 2015. The Georgia Division Sons of Confederate Veterans joins the nation in remembering this historic time in our nation’s history. See information at:
http://www.150wbts.org/