I’m so excited to inform you that we are weeks away from the groundbreaking for the newest WBTS monument in Tampa Bay will be held next month (in April)!

I would personally like to invite you to get in on the ground floor, so to speak, on the kick-off of this project, by purchasing an inscription brick (or repose bench).

Though not an SCV or UDC monument, this represents an extremely rare opportunity to ensure that our Southern history and ALL our Southern Veterans are remembered, in a Municipal Park…..recognized side by side with American Veterans of Other Wars!

***The commemorative program for the April 20th groundbreaking ceremony will include a “Roll of Honor” listing all sponsored Confederate Veterans, and contributors whose reply has been received by APRIL 10th.***

Would you or your chapter like to participate? The cost is $50 for a 4x8 brick with inscription or $100 for an 8X8 brick. A variety of logos are available including the SCV logo the Southern Cross of Honor or even the letters “SCV”. (This is a great idea for your UDC friends, as well).

Imagine these inscribed bricks being incorporated as in the “Cross of Honor” motif of the Monument as shown below: 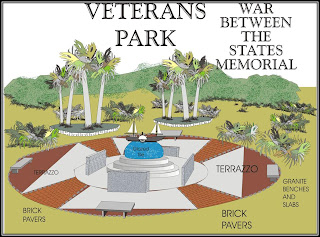 Both the printable order form and the approved monument design can be viewed here: http://www.veteransparkhc.com/WBTS.html and are also attached.

The visual focal point of the monument will be a blockade runner, a central part of Florida’s coastal history during the WBTS.

Over the past few years plans have been under development for a world- class veterans park to honor the service of residents of Hillsborough County, Florida who made extreme sacrifices during each war in the County’s history (KIA, POW, etc.). But integral in the design is an opportunity to honor all Confederate Veterans from any State or locality (as described above). Hillsborough County has contributed significant resources in converting the existing park and museum into a Veterans shrine...honoring all Veterans from all Wars, beginning with the Seminole War up to and including the Global War on Terror.

The new park will attract thousands of residents and visitors each year to pay tribute to fallen heroes from our area into perpetuity. Upon its completion, the War Between the States (“WBTS”) theatre will receive appropriate and proper recognition in the mainstream of the civic landscape—forever.

The Vietnam War Monument was dedicated in 2012, and in January of this year, the design plan for the WBTS Monument was approved.

And of course, you are invited to attend the ceremony on Saturday, April 20th. The Event will include traditional observance of Confederate Memorial Day in a ceremony on the ‘theatre’ site. The program will begin promptly at 2 p.m. and last about an hour. Refreshments will be served.

We have about 2 weeks to make sure that you and/or your camp are included in the PROGRAM, so please act now.

Please email me at siegels1@Mindspring.com or call me at 813-727-3920 if you would like more information on how to participate.

Looking forward to your participation…..

PS…please pass this along to others that you may feel might want to participate as well.

There are opportunities for uniformed Confederate Soldier re-enactors to participate in honor guard and color guard.