It is often misunderstood that all we do as Flaggers is stand out in public “waving” a Confederate Battle Flag. Although there are many times that we do forward the colors (whether it be in protest of a heritage violation, or in honor of our ancestors at a Memorial Service or event), a large part of the work we do is behind the scenes. The story of the Robert E. Lee Memorial Bridge signs here in Richmond is one example of such work.

Several months ago, Va Flagger Grayson Jennings noticed that the signs designating the memorial were missing from the bridge. He recalled that during construction 5-6 years ago, the signs had disappeared, and then re appeared after some inquiry, only to (apparently) disappear again.

His first request to VDOT was answered with the information that “The Lee Bridge across the James River in Richmond, while constructed by VDOT in the late 1980’s, was turned over to the City of Richmond for operation and maintenance upon completion. Any signing for that bridge is the responsibility of the City to keep up. VDOT would have no involvement in the replacement of signs designating the Lee Bridge.” It was suggested we contact the City Public Works Department.

The Richmond Public Works Department responded that they did not realize the signs were missing and would check into it. After many follow up communications, we received word on March 26th that new signs had been fabricated, and that we should look for them to be installed in approx. 2 weeks.

This was followed with a few more follow up emails and periodic drive-by sign checks. Finally, on Tuesday, May 21st, we were THRILLED to drive up to the bridge and find that the SIGNS HAD BEEN INSTALLED!!! Four signs now mark the bridge and are a visible reminder each day, to thousands of motorists, of the man for whom the bridge is named. 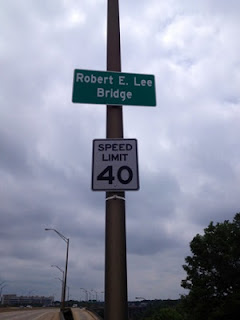 We share this story to encourage everyone to keep your eyes and ears open for these kinds of “quiet” heritage violations, which happen every day across the United States. Take time to find the appropriate people to contact and “keep the skeer on” (in this case, weekly, polite email inquiries) until they follow through, and the honor due our Confederate heroes is restored!

In this case, victory was won without a single flag being waved, and we never even got to try out our new slogan… “RETURN the signs! RESTORE the honor!”

Special thanks to Grayson for his diligence, and to the folks at the Richmond Public Works for stepping up and making this right.

*Check out our new blog and follow us here.