I retired from the Army almost 20 years ago and ran a large high school Army JROTC program.  In 2002 I successfully sued our school district in Leavenworth, Kansas for trying to illegally fire me just for asking if my son could wear his Dixie Outfitter t-shirt.  Kansas City Federal District Court handled the settlement requested by the district before they literally lost their shirts.  My son got to wear his shirt.  That did not end the retribution so I left and returned to teaching at the Army’s Command and General Staff College in 2004 where I frequently encounter ignorance as stunning as I did when working at the high school.

I taught graduate history at the staff college prior to retiring and, as a certified Army historian, continue to integrate history into all of my instruction.  I now teach executive-level leadership.  Our course continues to take our students to study at War Between the States battlefields and Chickamauga, Georgia is one of my favorites that we frequent.  Because our leadership course uses a case study centered on the movie “12 O’Clock High”, I tie my other course instruction to the case study.  For example, a direct tie to the 8th USAAF in WWII (“12 O’Clock High”) and the battle of Chickamauga is that the grandson of a famous cavalry division commander at Chickamauga was the first U.S. general killed in action in Europe during WWII.

In order to illustrate my instruction, I obtained three large glass display cases and populated them with historical military displays related directly to leadership instruction.  For “12 O’Clock High”, I emplaced an extensive collection of uniforms and equipment used by USAAF bomber crews.  Behind the exhibit I put posters showing the ties to our instruction and some historical facts.  For three years one of the posters had a photo of the general whose grandfather was a Confederate cavalry division commander at Chickamauga with an annotation that he was KIA over Germany in June 1943 leading bombers on a mission to Kiel.

One of my fellow instructors, retired Army officer, Joe Judge filed a complaint against me.  For three years he never looked at the display.  He was not interested.  Not only did I receive a formal counseling from my supervisor for emplacing this photo in the exhibit, I was threatened with punishment if it was not removed ---- effectively censoring factual history.  Judge, who has no history knowledge, was responsible for the censoring and banning of any display with the photo in the future.  His ignorance was solely based on his “feelings” that the photo and caption explaining who the general was might “offend” our black students.  Rather than educate our students, Judge decided that their potential feelings were more important than historical facts.

Because of this, I was forced to remove the display of Brigadier General Nathan Forrest, III in his USAAF uniform.  This was done despite the fact that Forrest, III was KIA and is now buried in Arlington National Cemetery.  I have taken the entire exhibit down and will no longer emplace any exhibits as censorship is the antitheses of intellectual freedom and education.  I know of other instances with fellow instructors of this type of political correctness over-riding common sense.  It is a sad effect of political correctness that is assisting in the dumbing-down of our culture ---- in this case our Army officers.  Thanks to Joe Judge, our students will wallow in ignorance because Joe had no clue that Brigadier General Nathan Forrest, the Confederate general, fought at Chickamauga and we certainly don’t want our officers to know the fact that his grandson fought honorably for the U.S., losing his life doing so.

The case in the exhibit showing BrigGen Forrest, III’s photo is below: 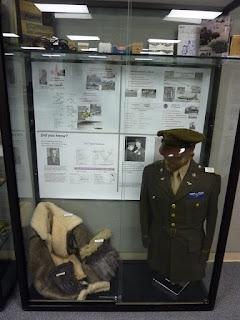 posted by Chuck Demastus at 3:36 PM