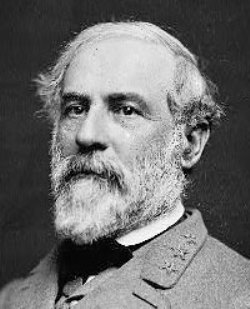 Sir Winston Churchill once said, ‘Lee was the noblest American who had ever lived and one of the greatest commanders known to the annals of war.’

Do young people still hear stories about George Washington, Booker T. Washington and Robert E. Lee? There was a time when schools and businesses closed in respect for the birthday of one of the South’s favorite sons -Robert E. Lee.

Friday, January 19, 2018, is the 211th birthday of Robert E. Lee, whose memory still weighs dear in the hearts of many Southerners. Why is this man so honored in the South and respected in the North? Lee was even respected by the soldiers of Union blue who fought against him during the War Between the States.

What is your community doing to remember this great man?

During Robert E. Lee's 100th birthday in 1907, Charles Francis Adams, Jr., a former Union Commander and grandson of US President John Quincy Adams, spoke in tribute to Robert E. Lee at Washington and Lee College's Lee Chapel in Lexington, Virginia. His speech was printed in both Northern and Southern newspapers and is said to had lifted Lee to a renewed respect among the American people.

Booker T. Washington, America's great African-American Educator, wrote in 1910, 'The first white people in America, certainly the first in the South to exhibit their interest in the reaching of the Negro and saving his soul through the medium of the Sunday-school were Robert E. Lee and Stonewall Jackson.'

American Presidents who have paid tribute to Lee include: Franklin D. Roosevelt, who spoke during the 1930s at a Robert E. Lee statue dedication in Dallas, Texas, Theodore 'Teddy' Roosevelt and Dwight D. Eisenhower who proudly displayed a portrait of Lee in his presidential office.

During a tour through the South in 1905, President Theodore Roosevelt told the aged Confederate Veterans in Richmond, Virginia, 'Here I greet you in the shadow of the statue of your Commander, General Robert E. Lee. You and he left us memories which are part of the memories bequeathed to the entire nation by all the Americans who fought in the War Between the States.'

Georgia's famous Stone Mountain carving of Jefferson Davis, Stonewall Jackson and Robert E. Lee was dedicated on May 9, 1970. William Holmes Borders, a noted African-American theologian and pastor of the Wheat Avenue Baptist Church, was asked to give the invocation. The many dignitaries attending this historic event included United States Vice President Spiro Agnew. Thousands of people bring their families each year to see this memorial to these three great Americans.

Who was Robert E. Lee that has been praised by both Black and White Americans and people from around the world?

Robert E. Lee, a man whose military tactics have been studied worldwide, was an American soldier, Educator, Christian gentlemen, husband and father. Lee said 'All the South has ever desired was that the Union, as established by our forefathers, should be preserved, and that the government, as originally organized, should be administered in purity and truth.'

Robert E. Lee was born on Jan. 19, 1807, at ' Stratford Hall ' in Westmoreland County, Virginia. The winter was cold and the fireplaces were little help for Robert's mother, Ann Hill (Carter) Lee, who suffered from a severe cold.

Ann Lee named her son 'Robert Edward' after two of her brothers.

Robert E. Lee undoubtedly acquired his love of country from those who lived during the American Revolution. His Father, 'Light Horse' Harry was a hero of the American Revolution and served three terms as governor of Virginia and as a member of the United States House of Representatives. Two members of his family also signed the Declaration of Independence.

Lee was educated at the schools of Alexandria, Virginia, and he received an appointment to the United States Military Academy at West Point in 1825. He graduated in 1829, second in his class and without a single demerit.

Mary was an only child; therefore, she inherited Arlington House, across the Potomac River from Washington, D.C., where she and Robert E. Lee raised seven children, three boys and four girls.

Army promotions were slow. In 1836, Lee was appointed to first Lieutenant. In 1838, with the rank of Captain, Robert E. Lee fought in the War with Mexico and was wounded at the Battle of Chapultepec.

Lee was appointed Superintendent of The United States Military Academy at West Point in 1852 and is considered one of the best superintendents in that institution's history.

General Winfield Scott offered command of the Union army to Robert E. Lee on April 17, 1861, but he refused. Lee said, 'I cannot raise my hand against my birthplace, my home, my children.'

The Custis-Lee Mansion 'Arlington House' would be occupied by Federals, who would turn the estate into a war cemetery.

Lee served as adviser to President Jefferson Davis, and then on June 1, 1862, commanded the legendary Army of Northern Virginia.

Lee was a man of honor, proud of his name and heritage. After the War Between the States, he was offered $50,000 for the use of his name. His reply was: 'Sirs, my name is the heritage of my parents. It is all I have and it is not for sale.' His refusal came at a time when he had nothing.

In the fall of 1865, Lee was offered and accepted the presidency of troubled Washington College in Lexington, Virginia. The school was later renamed Washington and Lee College in his honor.

The church bells rang as the sad news passed through Washington College, Virginia Military Institute and the town of Lexington Virginia. He is buried at Lee Chapel on the school grounds with his family and near his favorite horse, Traveller.

On this his 211th birthday let us ponder the words he wrote to Annette Carter in 1868: 'I grieve for posterity, for American Principles and American liberty.'