Southern Heritage
News and Views: The Effort in Flordia

The Effort in Flordia 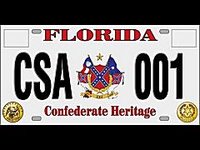 This morning at 10:00 AM, 8/18/06 H.K. Edgerton. Nelson Win Bush, and I held a press conference at the Confederate Monument on Lake Eola in Orlando. Cdr. Wesley Frank provided flags and himself in uniform.

My wife said we were really covered well on Channel 9, and that we were the Noon lead-in story. It was kind of cool seeing the trucks put up their masts and start broadcasting back to the studio. There was 50 yards of TV trucks along the street, and HK and Nelson put on their usual best for the press. The press actually ASKED us to sing Dixie for them!! In fact, they wanted it done before we even started the formal camera session.

WFTV Channel 9 has a feed of the story and a poll that we need to put out on the net so we look good:

Be sure to vote in this Poll. Tell your friends before they take the thing down.

Should be all over Central Florida news at 6PM

A GREAT DAY TO BE IN THE SOUTH!