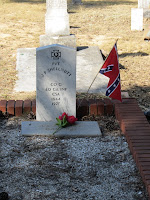 The news broke at approximately 3:20pm on October 18th, 2011, that just an hour earlier the Confederate Battle flags that had been stolen from the graves of 7 Confederate Veterans in the Yellow Dirt Cemetery located inside Georgia Power's Plant Wansley only 6 days earlier - with blessing of management -
Have Been Restored!!!!!!!

The mounting pressures from unrelenting forces finally woke up the "Southern" Company folks that they had not stepped, but jumped head first into a horrible situation by desecrating the final resting places of 7 Confederate Veterans violating numerous Georgia laws, then attempted to cover it up with denial and obfuscation -
at one point attempting to forbid visitors into the cemetery itself.

From the initial response to replacing the original missing 7 Confederate Battle flags on October 8th by the Haralson Invincibles Camp # 673, when called upon by descendants of one of the Confederate Veterans thru the heartbreaking and very damning media reports from Heard Citizen, News-Banner, Times-Journal and Carroll Star alerting us the flags have been removed again on October 12th, right on thru to those who answered the call to arms from such groups as the Sons of Confederate Veterans and people like Tommy PoP Aaron and his blog support, Charles Demastus for his ever diligent Southern Heritage News and Views, the excellent YouTube video by Chad Smith and the Facebook protest page and web support from Susan Hathaway, strong local efforts from Billy Bearden and Ernie Blevins as well as everyone reading this press release who helped make this moment possible

On this announcement
Thank Y'all very much - YOU HAVE BEEN HEARD AND OBEYED!

HOWEVER, no VICTORY is ever permanent and careful vigilance is always needed to ensure the vanquished do not rise up and repeat their evil deeds. Please do not consider this anything but temporary and we must be on full alert - especially during the next month for any possible corporate maneuvers.

Respecting the 30 day alert status, the time will be used to prepare a defense and strategy should any "permanent plan" not be to the satisfaction of the descendants or the SCV. We know they are using the time as well for their planning.

Guards are posted to ensure the proposed "truce" is honored.

This is a case where the descendants, who not current members of the SCV but planning to join, did much of the work as they had the most ability to claim direct harm, but without support from members of the SCV and many others they could have easily been minimized and run over by the Wansley Plant and Georgia Power.

Again, the descendants of those buried in the Yellow Dirt Church say "Thank y'all, it is truly a Blessing for all you have done for our Confederate ancestors here and throughout America"

The Confederate Battle Flag With The "St Andrews Cross"

This cannot be considered a victory if the other side considers it merely a truce. We tend to claim victory and then go home while our enemies know that we probably won't pick up the gauntlet the next time they throw it down. This is an old story. Remember, Satan never sleeps neither do his minions. We not only have to "claim" victory, but we have to be damned sure that it HAS been obtained and it WILL be continued - and we do that by disallowing the power company to simply return the flags and declare the whole thing over.

The cessation of hostilities was occasioned by the high profile the case began to take on, a situation which did not suit the power company one little bit. Knowing that our side tends to lose interest once things settle down and frequently are never able to regain interest when the battle commences yet again, I daresay if nothing more is done in another month or year the whole thing will begin again - and as one more year of Yankee propaganda will have been released in the culture, the next time the support for their actions might be overwhelming and no flags will be restored.

We have to continue to press for the matter to be addressed in the legal arena. What was done was against Georgia statutes. Simply returning the flags - especially after they had already been replaced once - doesn't "undo" the breach of the legal code especially when there is nothing on paper from the power company stating that no such action will happen in the future! I daresay, if any of our folks had trespassed and vandalized the power company's property, no amount of fixing the damage would do and those doing the trespassing and vandalism would be prosecuted to the full extent of the law. We should go forward to be sure that the same thing happens here.

Remember, we are dealing with a foe that sees any attempt at compromise as weakness on our part - and will act accordingly.