In April, 2011, York County, Virginia issued the attached proclamation, naming April 30th "Virginia State Flag Day" on the Sesquicentennial anniversary of the flag's adoption, and as a perpetual event.

A little history on how this came to be, from Billy Bearden...

"On January 28th, 2011, media reports stated that South Carolina, through legislation, celebrated it's 1st annual "State Flag Day" and it was on the occasion of it's 150th Anniversary.

It was about this time I did a little historical research and re-discovered that the flag of my home state was on the verge of its Birthday, and felt as a patriotic Virginian it should also join the ranks of those sacred standards whose citizens and politicians honor with a special and unique "State Flag Day".

Ours is a state flag steeped deeply in Confederate History and Heritage. Her Birth was in Virginia Secession, Her 1st four years of existence was to fly over the brave Confederate soldiers and citizens of Virginia. It was Robert E Lee who gave it original luster, flying the flag made of the seal his own Father helped to create. The motto is world famous and has endured the test of time for eons. Even the beautiful Salute to the Virginia Flag was written by a member of the United Daughters of the Confederacy, and is based directly on the Salute to the Confederate Flag.

This is a heritage and history I wish to protect, promote and preserve.

Sadly however, I did not find any official mention of such an event from Virginia. So I began to talk it up amongst my friends and connections via email and facebook. I also went as far as drawing up a rather small proposal for an official proclamation, and submitted it to various city (Hampton, Newport News, Lexington, New Kent County, James City County, Williamsburg, and York County) and state govt (Gov McDonnell) officials.

We invite all to join us and be a part of the inaugural annual event that we hope will grow in scope and support each year! 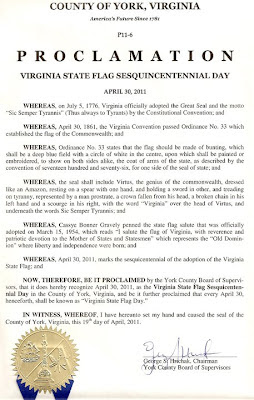 posted by Chuck Demastus at 8:09 AM