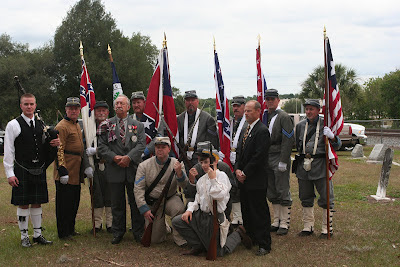 General Jubal A. Early Camp 556, Tampa FL, conducted a dramatic Southern Cross of Honor ceremony in memory of Major. David Huey Thrasher, 38th TN Infantry, on April 15, 2012 at City Cemetery in Dade City FL. Major Thrasher was buried in 1890 without his grave bearing witness to his Confederate service. Following the war, he was a founding leader of Pasco County FL. His descendents came from Alabama, Georgia and Florida for the ceremony, which featured a rifle salute and the "passing of the canteen" ritual. Early Camp was assisted in the rites by the Mary and Mollie Bell Chapter 20, Order of Confederate Rose, Tampa FL. The event garnered coverage in the Tampa Tribune and Dade City News. Early Camp, covering counties in and around the Tampa Bay area, is led by Commander Michael Herring (second from left in photo).

God bless all efforts toward our heroes!