Southern Heritage
News and Views: Southern Monuments: This Is Why!

Southern Monuments: This Is Why! 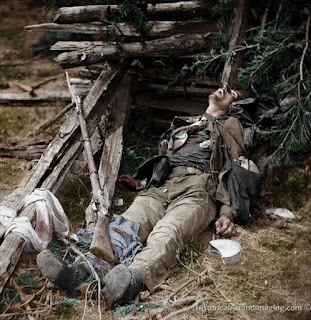 This is why monuments to Southern Soldiers stand and why they are important. This was someone’s son, father, brother, nephew, friend, sweetheart… There was a mother who held this child when he was sick, when he was scared by the night. There was a mother who tenderly kissed his forehead, sang and rocked him to sleep. There was a father who watched him take his first steps on a dusty cabin floor. There was a grandfather who taught him to blacksmith or farm. There were brothers and sisters he played among and got in trouble with. There was a preacher who taught him to fear the Lord. There was a sweetheart who prayed every day for his safety and his eventual return home. There was a loving wife and children who stood and watched as he marched off to defend his homeland…all eyes filled with tears, he turned back to wave what would be a final goodbye. And there lies his bent and broken body, his life gone, on a faraway field. The living there know not his name. There are no loved ones there to give him a final farewell and a proper burial, not even a modest pine box. If he was lucky, he was likely cast into a shallow ditch with many others like him. Those who loved him will never know, their lifetime’s long, whatever became of him, where he fell, what his final moments might have been, the thoughts and words he might have had as his journey here ended. And then one day, years, decades later, that mother, father, the brothers and sisters, sweethearts and wives managed to scrape together enough money in a desolate wasteland to build him a monument, so that he might not be forgotten. This is why monuments to Southern Soldiers stand and why they are important.