A number of members of the "we wants" community brought the issue before the City Council on Feb. 14, 2005. They described the flag as a symbol of hatred and said it should be removed...INFO HERE

Victim of Smear Campaign Gets Even With Morris Dees

posted by Chuck Demastus at 10:04 AM 0 Comments

posted by Chuck Demastus at 11:27 AM 0 Comments

posted by Chuck Demastus at 9:35 AM 0 Comments

Column advocated a kind of racism

In Dixieland will we make our stand?

posted by Chuck Demastus at 10:20 AM 0 Comments

posted by Chuck Demastus at 9:10 AM 0 Comments

Students and faculty discuss where the University stands in terms of the Mason-Dixon line; can the University be branded a 'Southern' school?http://www.cavalierdaily.com/CVArticle.asp?ID=26251&pid=1412

posted by Chuck Demastus at 9:23 AM 0 Comments 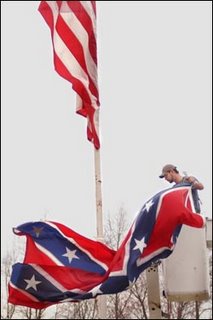 Oy ve’ Ozzie, where do you come up with this stuff??


A lawsuit filed today in U.S. District Court seeks $10 million in damages from Blount County education officials for harassment of a female high school student. Both the lawsuit and a request for a temporary restraining order filed simultaneously allege that William Blount High School Principal Steve Lafon threatened the minor student and “took close up pictures of [her] thighs,” with no other students or school employees present, in a pair of jeans her teacher, Mark Williams, claimed violated the school’s dress code.

Williams has been named as a co-defendant in the suit, together with the entire Blount County School Board. The incident occurred on March 3, only hours after Lafon had been served with a lawsuit stemming from the school’s ban on images of the Confederate flag. The female student whom Lafon allegedly forcibly photographed is the girl friend of one of the student plaintiffs in that case, and today’s suit claims that Lafon’s actions against her were in retaliation for the first suit. Williamson had sent several other students to the office for reported violations of the dress code, but only the girl friend was subjected to being photographed, the suit states. Knoxville Attorney Van Irion filed both complaints and represents plaintiffs in both actions.

The Southern Legal Resource Center of Black Mountain, North Carolina, is acting as co-counsel. The SLRC is a nonprofit legal organization that specializes in cases involving Southern heritage and culture. The motion for temporary restraining order requests that the female plaintiff be transferred out of Williamson’s class at once, and that neither Williamson nor Lafon be allowed within fifty feet of her.

Actually, the Civil War was about slavery

Ceremony salutes flag and its cause

posted by Chuck Demastus at 11:04 AM 0 Comments

posted by Chuck Demastus at 9:40 AM 0 Comments

KNOXVILLE, TN – Three high school students and their parents are suing the Blount County School Board and two school officials in connection with the ban on Confederate symbols currently in effect there. The suit will be filed today at the federal courthouse in Knoxville.

The suit charges that the students’ constitutional rights were violated between May of 2005 and January of 2006, when they were subjected to disciplinary action for wearing items of clothing bearing the Confederate flag. The action taken against the students, as well as the ban on Confederate symbols itself, violates their First Amendment rights of free speech. The disciplinary action taken against them also violates Fourteenth Amendment principles of equal protection and due process, the suit alleges.

Knoxville Attorney Val Irion is acting as counsel for the students and their families, supported by the Southern Legal Resource Center of Black Mountain, North Carolina. The SLRC, as it is known, is a legal organization that specializes in civil rights cases involving Southern heritage and culture issues.

“In a school system that supposedly prizes diversity and allows students to wear and display all manner of ethnic and cultural symbols, these kids were discriminated against simply for taking pride in their own ancestry,” said Roger McCredie, the SLRC’s Executive Director.

On February 10, Irion sent a letter to William Blount Principal Steve Lafon, with copies to the school board, seeking a review of the school’s policy. He received no reply. “That means the taxpayers of Knox County now are going to have to fund a lawsuit that’s been made necessary by their refusal even to discuss this matter.”

Earlier this week the SLRC settled a case out of court on behalf of its client Jacqueline Duty, a Kentucky student who was barred from her senior prom for wearing a, evening dress patterned after the Confederate flag. That case in turn was based on another SLRC victory, Castorina v. Madison County Schools, in which an appellate court struck down a school board’s ban on Confederate symbols. The Federal Sixth Circuit Court of Appeals, where the Castorina case was heard, includes Tennessee, McCredie noted. “The Blount County School Board’s legal counsel must surely be aware of that,” McCredie said.

County's removal of Confederate flag from seal stirs some

Confederate flag won’t fly over courthouse but will be displayed inside http://www.wcmessenger.com/newsbindata/news/news/FlagFlap.shtml

posted by Chuck Demastus at 10:20 AM 0 Comments