74th Anniversary of ‘Gone with the Wind’ Premiere 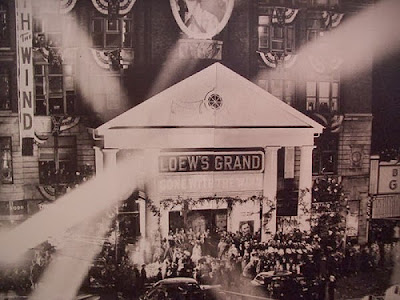 Do you remember when?

The clock was turned back in Atlanta, Georgia for the World Premiere of Gone with the Wind at the Loews Grand Theater on Peachtree Street. The beautiful theater was sadly destroyed by fire in 1978 but many folks still remember when Hollywood came to Atlanta to celebrate that wonderful movie and Atlanta’s own author Margaret Mitchell whose book about Scarlett O’Hara, the Southern people and the War Between the States would be read by millions around the world and be made into this exciting motion picture that has become a classic.

Do you remember when a movie premiere was a red carpet affair of excitement when you could take your family to the picture show without worrying about the language or sexual content of the film?

"Gone with the Wind" had its grand premiere during the Christmas Season of 1939, just 74 years after the end of the “War Between the States” and Sunday December 15, 2013 marks the 74th anniversary of that wonderful-classic movie that opens with: “There was a land of Cavaliers and Cotton Fields called the Old South. Here in this pretty world, Gallantry took its last bow. Here was the last ever to be seen of Knights and their Ladies Fair, of Master and of Slave. Look for it only in books, for it is no more than a dream remembered, a Civilization gone with the wind.”

"Gone with the Wind" won 8 Oscars for 1939, including Best Picture, and Hattie McDaniel, the first Black American to win an Academy Award, expressed her heart-felt pride with tears of joy, upon receiving the 1939 Academy Award for Best Supporting Actress for her memorable role as “Mammy.”

Victor Fleming won the Academy Award for Best Director and even though Max Steiner did not receive an award for his excellent music score, the “Gone with the Wind” theme song has become the most recognized and played tune in the world.

Vivien Leigh, who won the Academy Award for Best Actress in a leading role, humbly and eloquently summed her appreciation by thanking Producer David O. Selznick.

And, who can forget Olivia De Havilland as the pure-sweet Melanie Hamilton, Leslie Howard as Ashley Wilkes and Clark Gable as Rhett Butler, who told Scarlett: “Take a good look my dear. It's an historic moment you can tell your grandchildren about -- how you watched the Old South fall one night.”

Friday, December 15, 1939, was an icy-cold day in Atlanta but people warmed to the excitement of the world premiere of “Gone with the Wind”--The Selznick International Pictures “Technicolor” Production of the Metro Goldwyn Mayer Release of Margaret Mitchell’s novel about the Old South at the Loews Grand Theater.

And, we cried when Bonnie Blue Butler, the daughter of Rhett and Scarlett—played by Cammie King, was killed in a pony accident.

The cast of "Gone with the Wind" stayed at the historic Georgian-Terrace Hotel.

Anne Rutherford, who played Scarlett’s sister Carreen, took time to visit the Confederate Veterans at the soldier’s home and the stars toured the famous “Cyclorama” at Grant Park.

The festivities surrounding the premiere of "Gone with the Wind" included a parade down Peachtree Street with over three hundred thousand folks cheering the playing of “Dixie”, waving Confederate flags and shouting Rebel Yells.

And, many witnessed the lighting of the “Eternal Flame of the Confederacy”, an 1855 gas lamp that survived the 1864 Battle of Atlanta. The lamp remained for many years on the northeast corner of Whitehall and Alabama Streets. Mrs. Thomas J. Ripley, President of Atlanta Chapter No. 18 United Daughters of the Confederacy, re-lit the great light with Mr. T. Guy Woolford, Commandant of the Old Guard by her side.

Time Magazine wrote: “The film has almost everything the book has in the way of spectacle, drama, practically endless story and the means to make them bigger and better. The burning of Atlanta, the great "boom" shots of the Confederate wounded lying in the streets and the hospital after the Battle of Atlanta are spectacle enough for any picture, and unequaled.”

The Georgia Division Sons of Confederate Veterans joins the nation in Commemorating the 150th Anniversary of the War Between the States. Read more at: www.150wbts.org

Also, read more about the National Sons of Confederate Veterans at: http://www.scv.org/

Ya’ll come back now, you hear!

Calvin Johnson is a Speaker, Writer of short stories, Author of book “When America stood for God, Family and Country” and Chairman of the National and Georgia Division Sons of Confederate Veterans Confederate History and Heritage Month committee.http://www.facebook.com/ConfederateHeritageMonth
1064 West Mill Drive, Kennesaw, Georgia 30152, Phone 770 330 9792 or 770 428 0978