ALVIN, TX – The Southern Legal Resource Center has been asked to investigate Harby Junior High School’s removal of Confederate-related memorabilia from a long-standing school display, as well as the school administration’s treatment of students and parents who have been petitioning to have the items returned to public view.

At least two students have been disciplined by school officials for displaying Confederate symbols in the meantime, and the mother of one student has been threatened with arrest if she attempts to set foot on school property.

The school is named for Grace Harby, a longtime and highly regarded local elementary school teacher who was also active in the United Daughters of the Confederacy. Prior to her death she donated several personal items to the school, including pictures and her UDC pin and membership certificate. The UDC items displayed that organization’s seal, which includes a small representation of the “Stars and Bars” – the Confederate First National flag, a design completely different from the better known Battle Flag. In August, after administrators reportedly saw a parent photographing the exhibit, the Confederate items were removed, prompting a grassroots effort to have them restored.

Then, in September, one student was ordered to remove a belt buckle which showed crossed U.S. and Confederate flags, while another student had a Confederate flag sticker removed from his notebook. When one student’s mother, Tracee Alexander, attempted to set a meeting with school officials, she received a letter from Eugene A. Lewis, Jr., who signed himself “Chief of Police” of the “Alvin I.S.D. Police Department” forbidding her to contact the school further.

Ms. Alexander says she has caused no disruption and has only come onto the school campus at the invitation of school officials.

“This is nothing but rank intimidation,” said SLRC attorney Kirk Lyons. “It appears the school did something unwarranted and unpopular and is now trying to stifle dissent by using intimidation and threats.”

Officials have inidicated that although there has been no trouble among students relating to Confederate symbols, the school now considers them “inappropriate and potentially disruptive.”

The Southern Legal Resource Center, a civil rights legal organization specializing in Southern cultural matters, successfully sued a Kentucky school board in 2001 over its ban of Confederate symbols. In that case, Castorina vs. Madison County Schools, the Court held that mere anticipation of disruption was not sufficient to deny students’ First Amendment rights in displaying the Confederate flag. The Castorina case served as the precedent for a second SLRC victory in 2005, when another school board settled out-of-court after a student sued because she was banned from her senior prom for wearing a Confederate-themed evening dress.

Yankee Atrocities During the War

posted by Chuck Demastus at 8:44 AM 0 Comments

The Milwaukee Round Table contributed $250.00 and the Lee Round Table of Central New Jersey contributed $550.00. “They have shown great concern for historic preservation and set a fine example for other Round Tables and historic organizations. These donations demonstrate the commitment of people from all parts of the United States to our restoration efforts.” stated Patrick Hotard, Beauvoir’s Executive Director.

John D. Beatty of the Milwaukee Round Table issued the following statement: “We challenge all the Round Tables in the world (there are Round Tables as far afield as Britain and Russia) to contribute a least something to the Beauvoir rebuilding project.”

The board and staff appreciate all donations made towards the rebuilding efforts at Beauvoir. Donations may be mailed to Beauvoir, 2244 Beach Blvd., Biloxi, MS 39531. Questions regarding donations may be addressed to the business manager at businessmgr@beauvoir.org or by calling the office at 228-388-4400.

Beauvoir, The Jefferson Davis Home & Presidential Library, is a national historic landmark property owned by the Mississippi Division, United Sons of Confederate Veterans. It is located on U. S. Highway 90 in Biloxi, Mississippi. Currently the site is closed to the general public due to restoration projects and general safety concerns. For more information, please contact the Beauvoir staff at 228-388-4400.

Teen Wants To Show His 'Rebel Pride' At School

Lee, et al. would have kept the slave block in business

The Free Lance-Star, VA
Submit a letter to the editor letters@freelancestar.com
Story HERE

posted by Chuck Demastus at 11:52 AM 0 Comments

He was a worse tyrant than you thought, says Thomas DiLorenzo.
LewRockwell.com
Story HERE

October 12, 1870
Mourning reported all over the South. It was a time far different from today.
New York Times
Story HERE

posted by Chuck Demastus at 10:32 AM 0 Comments

“It was the black students that caused the disruption and threatened to beat the girl’s [rear]."
Story HERE

YOU ARE BEING HEARD

posted by Chuck Demastus at 10:28 AM 0 Comments

ALERT So you want to be a loser? 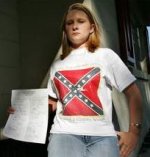 THE CONFEDERATE EXODUS TO LATIN AMERICA

posted by Chuck Demastus at 11:48 AM 0 Comments

Contact these folk fast, they are removing their E-mail! Give them a nice phone call.

If any re-enactor really believes in what their doing, they will boycott this event! PoP

posted by Chuck Demastus at 11:08 AM 0 Comments

‘The Battle Hymn of the Republic’

What It Really Means
By Michael Dan Jones
Story HERE

posted by Chuck Demastus at 6:54 AM 0 Comments