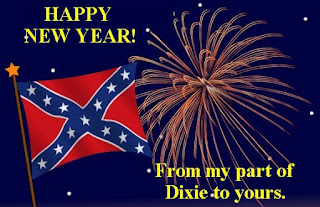 Invite Our Lord to join you on your path all through 2013, you will be blessed and a better person if you do.

5 - Trust in the Lord with all thine heart; and lean not unto thine own understanding.

6 - In all thy ways acknowledge him, and he shall direct thy paths.

Those of you who have been following this column for the past seven plus years might recall that, on several occasions, I have mentioned how I was introduced to the Confederacy when the librarian in my hometown of Talladega led me from the juvenile section (I was eight years old at the time) to the adult wing and walked me to the War Between the States section. She then selected a book about Confederate Admiral Raphael Semmes and told me that this was what I should be reading. I have been thankful for her assertiveness ever since.

Over the many years since that day, I have read and admired so much about the Confederacy and the magnificent Confederates - and magnificent they were. The names of the Confederate greats are legion - Davis, Lee, Jackson, Forrest, Cleburne, Early, Johnston, Wheeler and so many more - and the name of Raphael Semmes ranks right at the top of this list of Southern warrior royalty also. Semmes, in fact, accomplished something outstanding that was not matched by any other Confederate. More about that later.

Although Raphael Semmes has always been closely linked with Alabama, he was actually not a native Alabamian. He was born in Charles County, Maryland, in September of 1809 and by the time he was 17 years old had already received an appointment as a midshipman in the U.S. Navy. While working his way up the ranks in the Navy, the industrious Semmes also found time to study law. He was admitted to the Maryland bar in 1834 and in 1837 was commissioned a navy lieutenant.

Raphael Semmes experienced his first combat during the Mexican War between 1846 and 1848. He initially commanded a brig assigned to blockade the port of Veracruz, and later in the war joined the land forces of General Winfield Scott as an aide to Brigadier General William J. Worth. This proved to be foreshadowing.

After the war ended, Raphael Semmes moved to Mobile, Alabama - the city he would forever be associated with. He established a law practice in Mobile and also wrote a book about his experiences in the Mexican War. He maintained his position in the U.S. Navy and was eventually transferred to Washington, D.C., and assigned to the Lighthouse Service.

On February 15, 1861, he resigned from the U.S. Navy. This was barely a month after Alabama had seceded from the Union. Semmes offered his services to the Confederacy and was sent by President Jefferson Davis on a secret mission into the North to purchase military supplies for the Confederacy.

When he returned in April to the Confederate capital in Montgomery, he learned that he had been commissioned a commander in the Confederate Navy and appointed head of the Lighthouse Bureau of the Confederacy. Desiring action and not a bureaucratic position, Semmes convinced Confederate Secretary of the Navy Stephen Mallory to free him from his lighthouse position and allow him to convert a packet steamer to a destroyer that could ply the seas and destroy northern vessels of commerce. After the transformation, the vessel was named the CSS SUMTER and the legend of Raphael Semmes began.

For the next six months the SUMTER wreaked havoc on northern merchant ships capturing or destroying 18 of these vessels. While in Gibraltar for servicing and repairs, the SUMTER was blockaded by three Union warships and subsequently abandoned by Semmes and his crew. Raphael Semmes didn't realize it at this time but his greatest days were just ahead.

On his way back to the South after abandoning the CSS SUMTER, he received official notification that he had been promoted to captain and was ordered to England to take command of a new ship. This new ship was named the CSS ALABAMA and the legend was about to hit high gear.

Captain Semmes and his new ship left England in September, 1862, and for two years devastated northern commercial shipping in the Atlantic Ocean, the Indian Ocean and the Gulf of Mexico. During this period the CSS ALABAMA took a total of 69 prizes and became the most feared ship on the seas. During this period the terms "Alabama" and "raider" became synonymous and Captain Raphael Semmes gained great notoriety throughout North America and Europe and great admiration among the citizens of the South.

The spectacular run of the ALABAMA came to an end in June of 1864. Semmes had sailed the ship into the harbor at Cherbourg, France, for some badly needed repairs which required a dry dock. Within days of the arrival of the ALABAMA, a Union warship, the USS KEARSARGE, arrived at Cherbourg. Captain Semmes was faced with the decision to flee or fight. He chose the latter even though the ALABAMA was out-gunned by the KEARSARGE. After just over an hour of fighting, the ALABAMA was sunk. Raphael Semmes was rescued from the water by the crew of a passing English yacht and taken to England where great praise and admiration was directed his way by English admirers.

In November of 1864, Semmes returned to the South by way of Mexico. In February, 1865, he was promoted to rear admiral and placed in command of the James River Squadron in Virginia. After the fall of Richmond, however, he blew up his ships and took his sailors out of the area.

President Jefferson Davis realized the strategic importance of Danville, Virginia, to the war effort and needed someone with command experience to lead Confederate forces in its defense. He designated Raphael Semmes as his choice and the former sailors of the James River Squadron would make up a component of the ground forces. Admiral Semmes was designated a brigadier general by President Davis as this rank was considered to be the equivalent of rear admiral in the navy. Raphael Semmes thus became the only man in the Confederacy to hold both the rank of brigadier general in the army and rear admiral in the navy.

Not even Robert E. Lee could claim this distinction.

Raphael Semmes was with General Joe Johnston when Johnston surrendered his army in North Carolina. Semmes insisted that his rank on his parole be listed as brigadier general rather than rear admiral. Being a shrewd lawyer, he apparently believed that this designation would lessen his chances of being tried in court as a naval pirate because of his successes with the SUMTER and the ALABAMA.

After the War, Raphael Semmes returned to Mobile. He was elected probate judge of Mobile County but the Reconstruction occupiers of Mobile removed him from office and refused to allow him to hold the office to which he had been elected. He served for awhile on the faculty of the institution that is now known as Louisiana State University and later served as editor of the Memphis DAILY BULLETIN newspaper. He returned to Mobile in 1868 and practiced law there until his death on August 30, 1877.

He also found time to speak at various venues around the city and to write MEMOIRS OF SERVICE AFLOAT DURING THE WAR BETWEEN THE STATES.

There is a wonderful bronze statue of Raphael Semmes that stands in downtown Mobile not far from the bay. It was dedicated in 1900 to honor this outstanding Southerner and to recognize the outstanding accomplishments of this most extraordinary man.

Bob Hurst is a Son of the South who has particular interests in the Confederacy and the antebellum homes of the South. He is Commander of Col. David Lang Camp, Sons of Confederate Veterans, in Tallahassee and 2nd Lt. Commander of the Florida Division, SCV. He can be contacted at confederatedad1@yahoo.com and 850-878-7010 (after 9 PM).