Saturday April 26TH is Confederate Memorial Day in Georgia and other states. Some states also observe this Southern holiday of remembrance in May and June.

And the only surviving copy of the permanent Constitution of the Confederate States of America — a part of the Hargrett Rare Book and Manuscript Library collections — will be displayed a day earlier on Friday April 25 from 8 a.m. to 5 p.m. at the Richard B. Russell Special Collections Libraries at the University of Georgia, 300 S. Hull Street, Athens, Georgia. Read more at: http://www.libs.uga.edu/blog/?p=8612

The Confederate History and Heritage Month Committee of the Sons of Confederate Veterans encourages everyone to make it a family affair in attending Confederate Memorial Day activities throughout the USA and teaching your children about the role the men and women of the Southern Confederacy played in our nation’s history. Find out about Confederate Memorial events on our face book at: https://www.facebook.com/ConfederateHeritageMonth

Confederate Memorial Day has been a legal holiday in Georgia since 1874 by an act of the Georgia General Assembly and bill signed by then Governor James Smith, who also served as Confederate Colonel, Lawyer and Congressman and.....

The Georgia General Assembly passed Senate Bill No. 27 in 2009 officially and permanently designating April as Confederate History and Heritage Month and signed by Governor Sonny Perdue.

192 HILLSBOROUGH COUNTY VETERANS TO BE HONORED ON CONFEDERATE MEMORIAL DAY

The honored Veterans comprise many local Hillsborough County men who served in Florida units or provided material aide, but the ranks swell with Veterans from 11 other States who came to Florida after the War.  All 192 Veterans will have their names called in the Roll of Honor, followed by rifle salute and trumpet “tattoo”.

The three youngest Veterans to be honored are: Paul Boutan LaLane, Thomas  K. Spencer, and Darwin Branch Givens.  Darwin Branch Givens, as a 6 year old boy, ran through Tampa in 1864, alerting Tampa of an imminent invasion with the cry “The (Yankee) Devils are Coming” in advance of the ’64 invasion.  LaLane, 13 at the time, fired cannons on Ft. Sumter, South Carolina on April 12th and 13th.  His older brother was a Citadel Cadet and was a member of the Palmetto Guards.    Spencer, 15, of Tampa, enlisted as a drummer boy, served for about a year, was discovered as being too young and was discharged.  Anxious to contribute he volunteered on a blockade runner, but was captured and languished in a POW camp for 7 months before being released.  He then served as a messenger in Florida, and was the last Confederate to surrender.

The Veteran’s locations of origin hail from as far away as Pennsylvania, Ireland, Germany and Spain, showing the diversity of the men who pledged their life and fate to defend their family against the armed invasion of their States.  Ranks range from privates and seamen to Color Sergeants up the ranks to Ships Captains, Surgeons and Colonels.

After the War, these Veterans would be integral threads in the fabric of the growth and prosperity of Hillsborough County.  Spencer would become Sherriff, the first to appoint a Black deputy, Levin Armwood; James McKay, Jr. would be the 34th mayor of Tampa, and would continue his father’s shipping business that exists today.

5 unknown Veterans as well as unknown slaves associated with the various Tampa households, whose names are known only to God, will be honored as well.  The veterans represent all areas of service:  navy, artillery, infantry, cavalry and Civil Service and material aide (include blockade running).

Confederate Memorial Day, first observed in 1866, is an official State of Florida holiday (F.S. 683.01(1)(j)), set aside as a special day to observe Veterans who served in the Southern Forces in the conflict between the United States of America and the Confederate States of America between 1861 and 1865.

After the Spanish American War and the spirit of re-unification intensified, an in 1898, President William McKinley expressed the tone of the nation saying "Every soldier’s grave made during our unfortunate civil war [sic] is a tribute to American valor… And the time has now come… when in the spirit of fraternity we should share in the care of the graves of the Confederate soldiers… and if it needed further justification it is found in the gallant loyalty to the Union and the flag so conspicuously shown in the year just passed by the sons and grandsons of those heroic dead.”  And in 1910, by act of the US Congress (P.L. 38, 59th Congress, Chap. 631-34 Stat. 56) equal status was awarded to Veterans of the CSA and Veterans of the USA.

The climax of the Cavalcade will be the dedication of a new memorial marker to Confederate States of America (CSA). Cabinet member and first Jewish member of an American Presidential Cabinet, Judah P. Benjamin, who traveled through Hillsborough County in his exile after the capture of Richmond, VA, the Capital of the CSA.

The United Daughters of the Confederacy® (UDC) is the Nation’s Oldest Patriotic Organization, dating to 1896, whose original purpose was the care of the aging Confederate Veterans after the War Between the States.    Today the organization has five objectives:  Memorial, Patriotic, Benevolent, Historical and Educational. 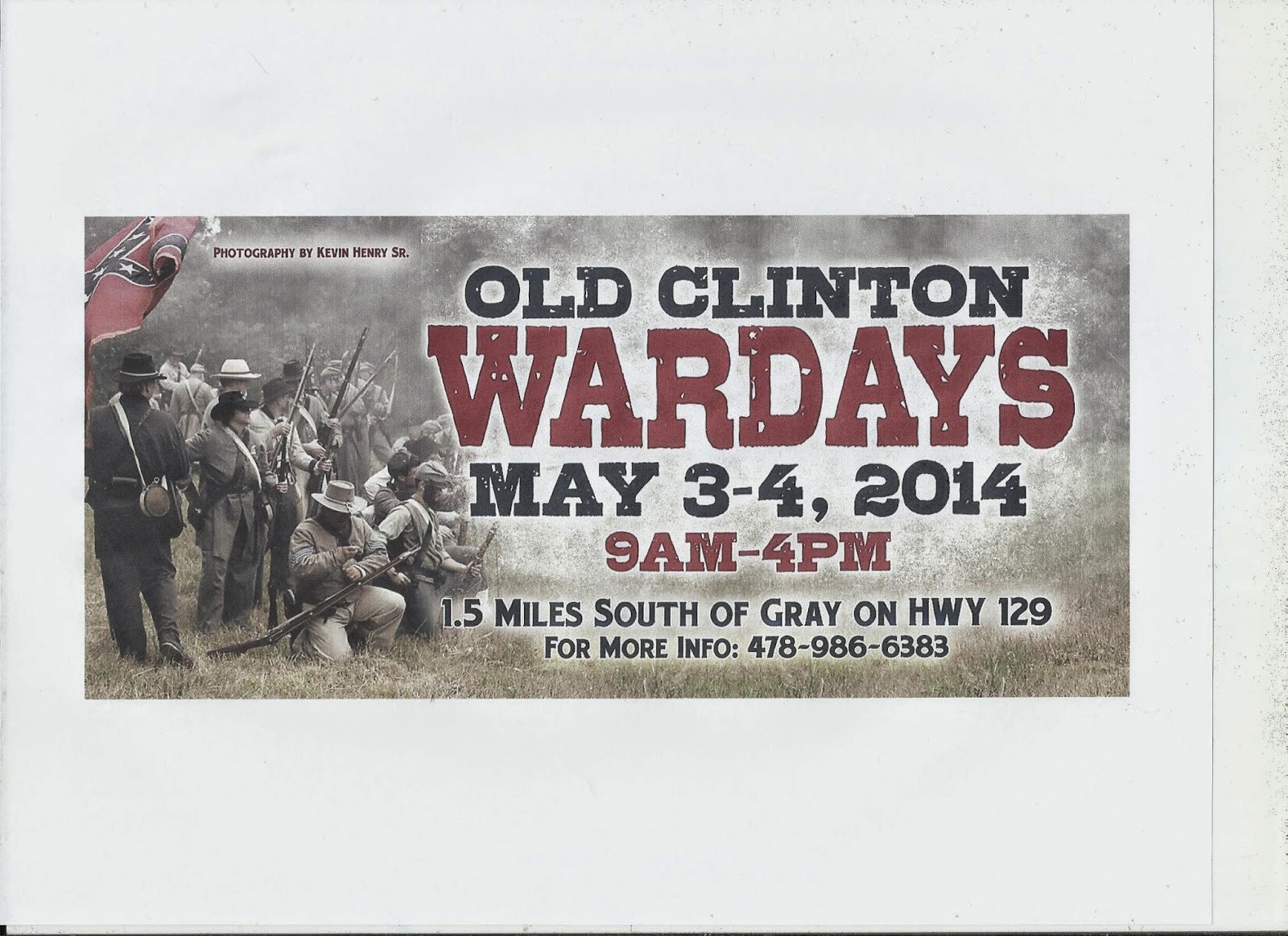 Come to Old Clinton and take a step back in time on May 3 & 4, 2014, when re-enactors from the Southeast recreate the Battles of Sunshine Church and Griswoldville, both of which took place in 1864 during Sherman’s March to the Sea.
Beneath a windblown battle flag, tents will spring up on grassy fields in the town. Soldiers from grizzled veterans to beardless recruits, both blue and gray, will gather. As in July and November of 1864, the rattle of musketry and the rolling thunder of cannons will shake windows in old homes.
The McCarthy-Pope House, circa 1809, the oldest house existing house in Clinton, will be open for tour. Ladies of the Confederacy will have the house furnished and decorated in the era of the War Between the States. Miss Annie’s Store, which will be set up as an 1800’s mercantile establishment, will also house a display of a wide variety of war relics, a prize winning exhibit of Griswold pistol parts, a beautiful example of a finished Griswold pistol, a Burnside carbine, other war weapons, and authentic Confederate currency.
The 16th Georgia will again sponsor rapid fire as well as ultimate soldier/U.S. & C.S. authenticity contests and unit drill competition this year.
The entire event takes place in the Old Clinton Historic District, which is listed in the National Register of Historic Places. Self-guided walking tour information will be available.
Crafts of the era will be demonstrated; “modern” arts and crafts will also be available for purchase; and “modern” as well as food of the period will be served.
Saturday’s program will conclude at 8:05 P.M. with the 16th Georgia, Company G, Jackson Rifles, CSA conducting a memorial service in the Old Clinton Cemetery to honor Clinton’s Confederate dead.
Gates open at 9:00 A.M. Battle at 2:05 each day. Admission/Contribution each day: Adults - $5; Students 18 and under $3; Children under 6 – Free. Memorial service – Free.
Clinton is located 12 miles NE of Macon, 1-½ miles SE of Gray, one block west off US Hwy 129. For more information contact Earlene Hamilton at 478-986-6383 or the Jones County-Gray Chamber of Commerce & Visitor’s Center at 478-986-1123 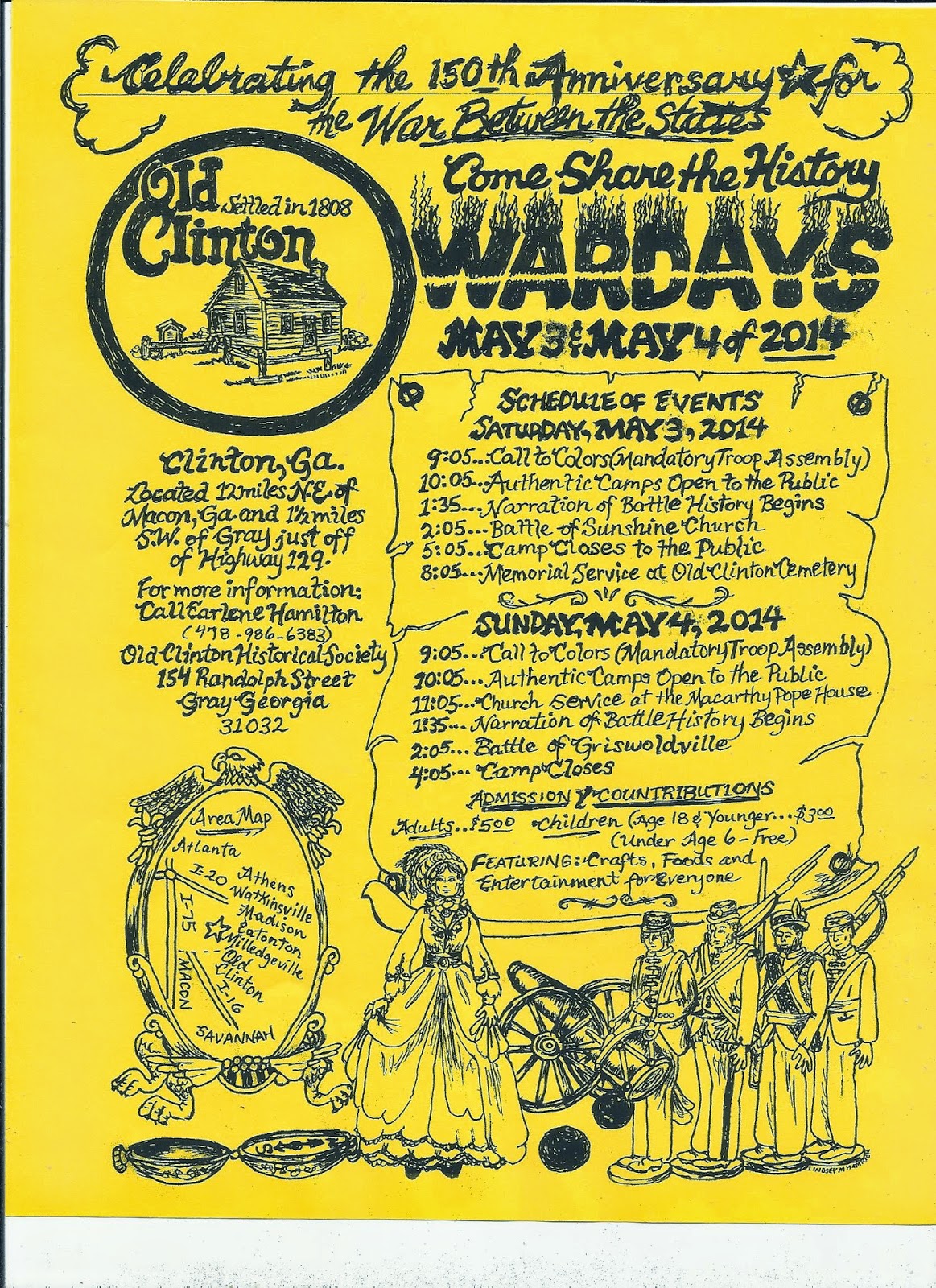 posted by Chuck Demastus at 9:54 AM 0 Comments