Come to Old Clinton and take a step back in time on April 30 & May 1, 2016, when re-enactors from the Southeast recreate the Battles of Sunshine Church, which took place in July of 1864, and Griswoldville, which took place in November of 1864 during Sherman’s March to the Sea.
Beneath a windblown battle flag, tents will spring up on grassy fields in the town. Soldiers from grizzled veterans to beardless recruits, both blue and gray, will gather. As in July and November of 1864, the rattle of musketry and the rolling thunder of cannons will shake windows in old homes.
The McCarthy-Pope House, circa 1809, the oldest house existing house in Clinton, will be open for tour. Ladies of the Confederacy will have the house furnished and decorated in the era of the War Between the States. Miss Annie’s Store, which will be set up as an 1800’s mercantile establishment, will also house a display of a wide variety of war relics, a prize winning exhibit of Griswold pistol parts, a beautiful example of a finished Griswold pistol, a Burnside carbine, other war weapons, and authentic Confederate currency.
The 16th Georgia will sponsor a children’s battle and a Ladies Tea will bring back memories of gentler times. The National Naval Civil War Museum in Columbus is to bring a Naval Display/Marine, with replica cannon like those once made in Macon
The entire event takes place in the Old Clinton Historic District, which is listed in the National Register of Historic Places. Self-guided walking tour information will be available, and guided tours are available by pre-reservation.
Crafts of the era will be demonstrated; “modern” arts and crafts will also be available for purchase; and “modern” as well as food of the period will be served.
Saturday’s program will conclude at 8:05 P.M. with the 16th Georgia, Company G, Jackson Rifles, CSA conducting a memorial service in the Old Clinton Cemetery to honor Clinton’s Confederate dead.
Gates open at 9:00 A.M. Battle at 2:05 each day. Admission/Contribution each day: Adults - $5; Students 18 and under $3; Children under 6 – Free. Memorial  service – Free.

www.sshfl.org and you will receive an invitation to the call.Annual individual memberships only $25, family $35, and students $15.Robert E. Lee said "Everyone should do all in his power to collect and disseminate the truth, in the hope that it may find a place in history and descend to posterity. History is not the relation of campaigns and battles and generals or other individuals, but that which shows the principles for which the South contended and which justified her struggle for those principles.”Combine your voice with others...are you mad enough yet? Take action today to Save Your Southern Heritage and sign up at Save Southern Heritage - FL

The Cause of the War


Before 1824 the U.S. had an average tariff of 15 to 20 percent.  It was believed that this was enough to meet the needs of the government and not create a burden to any section of the country.
Northern manufacturers, with the aid of Henry Clay of the Whig Party, pushed for higher tariffs in 1824.  The South strongly opposed these tariff increases.  The South largely depended on the North or Europe for its manufactured consumer and agricultural goods.  The North received about 20% of the South’s cotton exports while most of the exports went to Europe.  A protective tariff was a benefit to the Northern states, but created an economic hardship on the states of the South.
In late 1824 the politically dominant North passed an average tariff of 35%.  This tariff caused an economic boom for the North, but was a hardship on the agricultural South.  South Carolina saw its exports fall 25% over the next two years.  In 1828 the greedy Northern politicians raised the average tariff to 50%.  History usually refers to these last two tariffs as the “Tariffs of Abomination”.
As a result, South Carolina called a state convention to nullify the tariffs of 1828 and 1832 and claimed them to be unjust and unconstitutional.  Armed conflict was barely averted due to a compromise in 1833 with the efforts of John C. Calhoun which reduced the tariff back to a normal level of about 15%.  It remained at that level until 1860, much to the disdain of Henry Clay and the Whigs.
The Whig Party, as well as the Republican Party which replaced it, always held the policy of high protective tariffs.  The U.S. Congress passed the Morrill Tariff Bill in 1860 (named for steel manufacturer and Republican Congressman Justin S. Morrill of Vermont) which raised the tariff from 15% to about 37% with an increase to 47% within three years.  Tariff revenues were tripled due to the increase in items covered.
Tariff revenues fell disproportionately on the South, accounting for 87% before the Morrill Tariff.  The tariff protected the industrial interests of the North while greatly raising the cost of living and commerce in the South.  This reduced the trade value of agricultural exports to Europe and placed an economic hardship on many of the Southern states.  What is even more obscene is that over 80% of these revenues were used for public works and industrial subsidies in the North.  We call this redistribution of wealth.
Lincoln campaigned for the Morrill Tariff in 1860 which was incorporated into the Republican Party Platform.  Two days before the election in November of 1860, the “Charleston Mercury” expressed the feelings of South Carolina with this editorial:

“The real causes for dissatisfaction in the South with the North are in the unjust taxation and expenditure of the taxes by the Government of the United States, and in the revolution the North has effected in this government, from a confederated republic, to a national sectional despotism.”

Upon the election on Lincoln, South Carolina and the Gulf states began to call for secession.  In Lincoln’s inaugural address on March 4, 1861, he stated that the revenues would be collected, even from the seceded states.  Lincoln manipulated the firing on Ft. Sumter by South Carolina when he lied about not resupplying the fort.  This swayed the Northern opinion, which had been in favor of peacefully letting the South go its own way, to that of being angry because the South “fired upon the flag”.  Three days after the firing on Ft. Sumter, Lincoln called for 75,000 troops to “put down the rebellion”.  This caused the border states to secede as well.  The Southern states fought an illegal invasion for four long years, seeing their homes and property looted and burned, crops burned, animals stolen or shot, women (black and white) raped, and innocent civilians murdered. Nowhere in any Union or Confederate diary or letters is the mention of “fighting to free the slaves” or “fighting to defend the institution of slavery”.  It was a tariff war, as stated in European newspapers.  A war of subjugation and total control perpetrated by greedy Northern politicians and industrialists.  Yet, for 150+ years we have had the Marxist rewritten version of Yankee “history” shoved down our throats claiming the North was on a moral crusade to free the poor, downtrodden black race.  Bah, Humbug!

(Mostly referenced from “The Un-Civil War”, by Leonard M. Scruggs)

Chuck, please post this 1" Honor Pin as I have replaced the old 3/4" version I sent out in 2005 with this new 1" pin.  Please help and I will try to get the cost down if I can get enough orders to do a reorder on the pins at a higher level.  I'm paying $1.74 each for the pins now and can possibly get my costs down to $1.55 or below if I order in larger quantities.  I want these out there!

I designed these pins back in about 2005 and sold them out without ordering in a new batch.  I decided it was time to get another order in for the pin in the 1" size rather than the former 3/4" size back 11 years ago.  I am selling them as follows:

1 -  $2.25 plus postage to be paid by responding to my invoice sent after I have mailed them and have the postage.

10 or more -   $2.00 plus postage to be paid responding to my invoice as above. Please contact me if you have any questions, particularly regarding large orders. 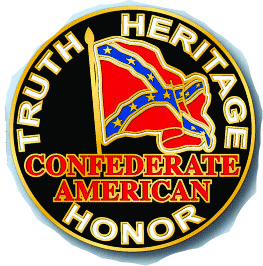